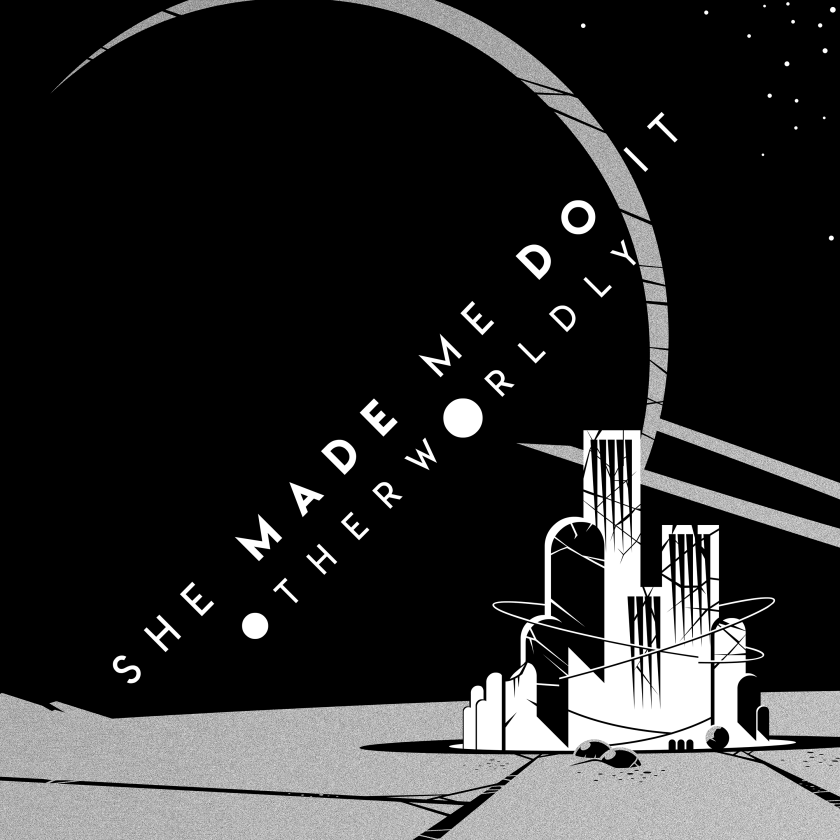 We’re glad to announce that New Wave- and electronica-inspired rock band She Made Me Do It have released a new E.P. this past Friday, entitled Otherworldly.

She Made Me Do It are from London, United Kingdom, and are comprised of Shaheena Dax (Rachel Stamp) – Vocals, Bass, Keyboards; and Will Crewdson (Rachel Stamp, Adam Ant) – Guitar, Vocals, Keyboards. They are joined live by Joe Holweger (Adam Ant) on drums. Their Otherworldly E.P. was produced by Will Crewdson and mixed by John Mitchell.

As the band describes their new release, “From the dark, dense, and heavy post-punk pounding of Never Sleep to the electronically kinetic pop of Otherworldly via the bouncy riff-laden Confessional Day, this E.P. is a rollercoaster trip inside the band’s hook-laden psyche.”

Starting the E.P. is the compelling New Wave-inspired title track, “Otherworldly,” released as a single last month (in case you missed it, you can read our review of the track here). The bright keyboards and distorted guitar on this track begin the release with an ethereal, yet driven sound, and are followed by “Confessional Day,” a dynamic song characterized by powerful vocals and guitar riffs. I think the band’s creative compositional skills are quite evident on “Confessional Day,” in which echoing, effects-laden guitars and a brief solo in the Phrygian mode present an ephemeral, dreamlike sound midway through the track, contrasting nicely with the otherwise energetic-sounding track.

In “Nowhere Land,” eerie keyboards provide a nice counterpoint to the melodic, pop-like refrains, and add a sense of tension that complements the lyrics well. And on the more upbeat track “Undeniable,” the clean bass, syncopated percussion, and haunting vocals are later joined by distorted guitar chords, which add a heavy dimension to the track. The next song, “Never Sleep,” is a highlight of the album for me, in which metallic-sounding guitar and a smooth vocal cadence flow nicely throughout the track, leading to a dynamic and spirited chorus. The E.P. is completed by the memorable final track, “Endgame,” in which inspired guitar soloing build upon the melody quite well towards the end of the track.

She Made Me Do It’s Otherworldly E.P. is quite an enjoyable listen throughout; and as was the case for their previously released single, I would highly recommend this E.P. to fans of New Wave and alternative rock alike.

Don’t forget to support this project and to follow on Instagram, Facebook,  Twitter, YouTube, Soundcloud  and Spotify. You can also check out their official website. If you enjoy their music and are able to provide monetary support, you can download their music on Bandcamp or for virtual concerts you can go to songkick  “Live from their sofá to yours”.

It also helps to stream and share their music; you can obviously find it in the following Playlists:  Less Than 1,000 Followers, Indie Only, Fresh Singles, and Alterindie State Of Mind.