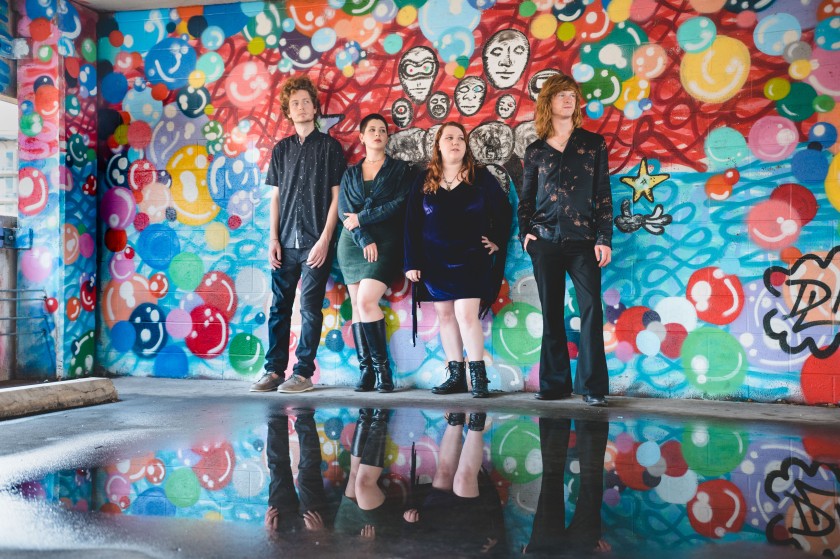 Gentry Blue are Lydia Gentry (lead vocals and electric violin), Travis Fairley (guitar), Jo Jeffries (bass), and Brendan “Debo” DeBonis (drums). Described “as if 90s grunge did 70s psychedelic rock,” Gentry Blue combine the catchy melodies of classic psychedelia with elements of progressive rock on their debut EP. At the same time that the band draws inspiration from such well-known rock and roll greats as Janis Joplin, Rush, and Pearl Jam, they have developed a sound that is uniquely their own.

Describing the inspiration behind Pyrite and Steel, the band writes, “The general mood of Pyrite and Steel is brushing off yourself after you’ve had a rough fall from the sky. The future is terrifying and bleak, but one cannot simply give up in the face of darkness. To us, being made of pyrite and steel is being resilient in harsh times and living to tell the tale while sticking around for others. It’s reaching out a hand to a stranger when the overall society is instead cruel. Several songs like “Downfall” and “What Lies on the Other Side” were written a bit before the COVID pandemic hit, but the general mood of the EP reflects a feeling that I especially started getting where being optimistic and doing the right thing seemed rebellious.“

And for listeners who are unfamiliar with Gentry Blue’s music, the band writes, “One could describe Gentry Blue’s music as ‘90s grunge meeting 70s psychedelic rock, with some electric violin added in!’ Some of our songs even have a slight medieval or Celtic flair, especially Origins. We like to call it ‘tavern rock.’”

Pyrite and Steel begins with the opening electric guitar riff of “Cutthroat,” which is soon joined by the electric violin, along with the rocking groove established by the bass and drums. Throughout the track’s compelling passages, the vocals complement the instruments quite well, intertwining creatively with their melodies. “What Lies on the Other Side” is colored by a more introspective mood, further demonstrating the band’s brilliant songwriting as the existential lyrics blend nicely with the distortion- and wah-drenched electric guitar.

The next track, “Origins (Of Your Heartbreak),” recalls retro progressive rock artists such as Rush, and features a dynamic electric violin riff as well as a blistering, overdriven guitar solo. “Familiar Ghosts” at times brings to mind the dark, ponderous sound of 90s grunge bands, and further exemplifies Gentry Blue’s creative songwriting skills as the track takes the listener on a journey complete with shifts in tempo, rhythm, and melody. The EP concludes with the riff-driven track “Downfall,” which features wonderfully intense electric violin and guitar solos.

Pyrite and Steel is quite an enjoyable listen throughout, and I would highly recommend this great EP to fans of psychedelic- and progressive rock alike.

Don’t forget to support this project and to follow on Instagram, Facebook, TikTok,  YouTube, and Spotify. You can also check out their official website If you enjoy their music and are able to provide monetary support, you can download their music on Bandcamp. or for virtual concerts you can go to songkick  “Live from their sofá to yours”.

It also helps to stream and share their music; you can obviously find it in the following Playlists:  Less Than 1,000 Followers, Sickest & Dopest, Alterindie State Of Mind and Hot Stuff Metal.