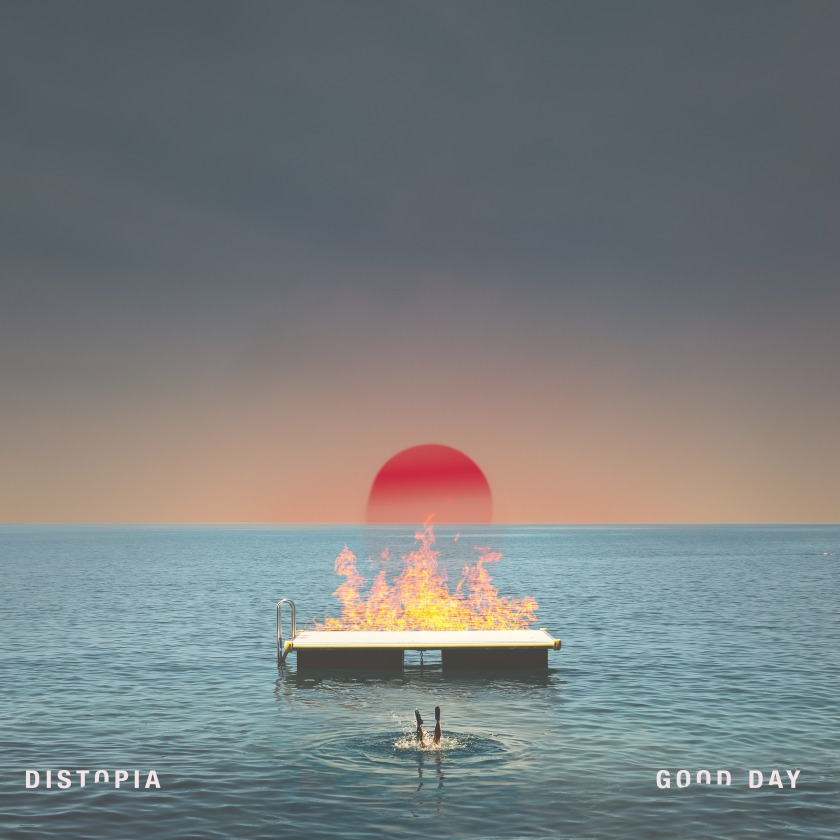 Distopia was formed in early 2020 by Alex Silver (vocals, guitar), John Marc Degaard (drums), and Jason Robins (bass). They have been recording their full-length LP, which they plan to release in mid-2021; and prior to releasing their latest single, Distopia have released two other singles earlier this year, “Made For You” and “Healing.”

Since they picked up their instruments in elementary school, Alex, Jason, and John Marc gravitated towards the music of artists such as Nirvana, The Beatles, Red Hot Chili Peppers, who have all impacted Distopia’s sound and writing.

Speaking about his inspirations for creating music, Alex writes, “Since my parents’ divorce, I’d write songs almost daily to deal with everything going on in my life at the time. Things weren’t easy for me while I was growing up. My biggest songwriting inspirations are John Lennon and Kurt Cobain, which definitely shows in my music.”

And describing the story behind forming Distopia, Alex says, “I went to the Frost School of Music at the University of Miami for 4 years. After college ended, I had this crazy abundance of songs and a lot of them I didn’t want to give up to other artists. I reached out to two of my closest friends that I thought of as some of my favorite musicians to see how we’d sound together. After the first rehearsal, I knew Jason and John Marc were the perfect musicians for the sound I was trying to go for. We started working on different material, and within a week, we had 20 songs ready to record.”

Alex continues, “Something really clicked the first time we played together as Distopia. I came into it hoping they’d be down to help record some of my songs and play live, but it turned into a real band where we all contribute and are equally important. Couldn’t be happier with the way things turned out and I’m so excited to show everyone what we’ve been working on.”

About the inspiration behind writing “Good Day,” Alex says, “I wrote this track half way through college in Miami. I wasn’t really doing well, and was writing a lot of negative songs. I remember waking up one day in the best mood I’d been in in awhile, and a Beatles song popped up on one of my playlists I was listening to. I was so inspired, I immediately grabbed my guitar and it came out so easily.“

“Good Day” was later recorded by Distopia, and features guest vocals by Haley Flake; as Alex writes, “About 2 and a half years later after Distopia formed, we recorded this song within a few hours with, and I knew Haley Flake’s voice would be perfect for the chorus I had in mind. She killed it!”

Alex hopes that the positive sound of “Good Day” can improve the listeners’ mood; as he says, “This is probably the most positive song we have lol I hope it can make at least one person out there happy.“

“Good Day” begins with a shuffling hi-hat rhythm, and a bright lead guitar melody soon joins in over palm-muted rhythm guitar notes. As the snare drum kicks in during the track’s first verse, the track’s uplifting lyrical passages begin, with wonderfully resonant vocal harmonies highlighting sections of the lyrics. At the same time, the catchy vocal melodies during “Good Day”’s verses are sustained by cheery guitar chords as well as the grooving bass, which add nicely to the positive mood of the track. During the first chorus, the male- and female vocals harmonize together while a sitar buzzes distantly, creating a more reflective (yet nonetheless uplifting) vibe and leading perfectly back into the next verse.

Throughout “Good Day,” Distopia’s brilliant songwriting and attention to detail are quite apparent, with nice touches like vocal harmonies that sometimes trade off lyrics and an instrumental break towards the end of the track that carries the momentum of “Good Day” quite well into the final chorus. At the same time, Distopia’s excellent musicianship makes “Good Day” quite an enjoyable listen, and I would highly recommend this track to fans of indie rock/pop and alternative rock alike.

Don’t forget to support this project and to follow on Instagram, Facebook, and Spotify. It  also helps to stream and share their music; you can obviously find it in the following Playlists:  Less Than 1,000 Followers, Fresh Singles, Indie Only, and Alterindie State Of Mind.