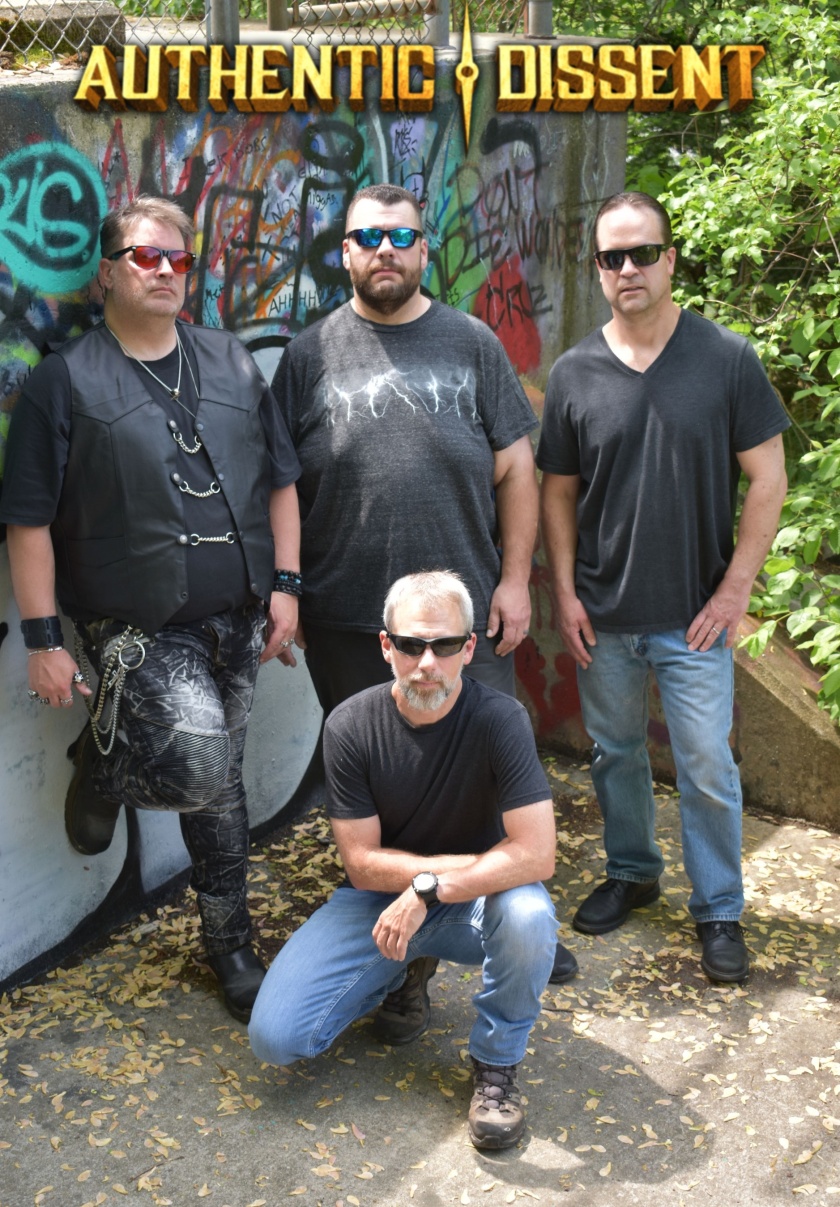 Authentic Dissent are currently comprised of Brian Gates (vocals), Mike Tortola (drums), Mike Osborn (guitars), and Dave Lawley (bass); and Mike Boisclair played drums for their EP. Authentic Dissent’s recording line-up came together in 2018, and their current line-up was established in 2020; however, Mike Osborn and Dave Lawley have been friends since childhood, and played in a number of cover bands together over the years. Because of the duration of their project (planning started in 2014, and the EP was completed in 2020), it took a strong friendship to work through the ups and downs and finish it.

Gradually… Then Suddenly was released in February of this year as a CD/download. The guitar and bass were recorded by the band, while the drums and vocals were recorded at The Den Studios in North Reading (Massachusetts) by Doug Batchelder (who also did the mixing); and the EP was mastered by Jamie King of Jamie King Audio. Authentic Dissent have also recorded an upcoming digital single, “First Shot,” which will be released on June 25th of this year.

Authentic Dissent’s EP considers the theme of the current financial state of the United States, and the threat that is looming as its undisciplined spending habits continue unabated; as the band writes, “The theme of the EP was inspired by the reckless behavior of the US Government related to overspending and the impact it is having (and will have) on the general public and future generations. Each song highlights a different aspect of this threat, which is largely ignored by Americans and the media. While this is a topic that is of interest to us, we are not making a political statement of any type and we are not a ‘political’ band. We simply believe it is a real problem that no one talks about.”

The first track on the EP is “Res Ipsa Loquitur,” which begins with a vocal sample as a sustained, siren-like electric guitar sound is joined by waves of distorted power chords and slow, foreboding drums. The bass and drums then set the track nicely into a groove, and the chord progression leads to a blistering guitar solo midway through the track. The next song on the EP, “Gradually…Then Suddenly,” is introduced by rumbling bass and a driving guitar riff, which is later extrapolated on by a captivating guitar solo as well. “The Weight of the World” starts with thundering guitar chords, which soon take on a more restrained, palm-muted sound as the lead guitar licks soar above them, while vocal harmonies underscore the track’s choruses quite well.

The next track, “The Survival Of The Fittest,” immediately locks into a mid-tempo, thrash-like groove, accentuated by the vocals and at times punctuated by double-time attacks of bass drums and guitar. Towards the end of the track, subtle rhythmic changes reflect Authentic Dissent’s impressive attention to detail, and may remind the listener of early Metallica. The last track on the EP, “Resolve,” is introduced by the ticking sound of a clock, and is characterized by somber, reflective acoustic guitar melodies. A bluesy electric guitar adds to “Resolve”’s melancholy mood, and towards the end of the track, distorted, palm-muted notes create a sense of tension as the ticking sound of a clock returns ominously.

Gradually…Then Suddenly is quite an enjoyable listen, and attests to Authentic Dissent’s excellent musicianship and inspired songwriting. I would highly recommend this EP to fans of heavy metal and hard rock alike.

It  also helps to stream and share their music; you can obviously find it in the following Playlists:  Less Than 1,000 Followers, Hot Stuff Metal, and Sickest & Dopest.