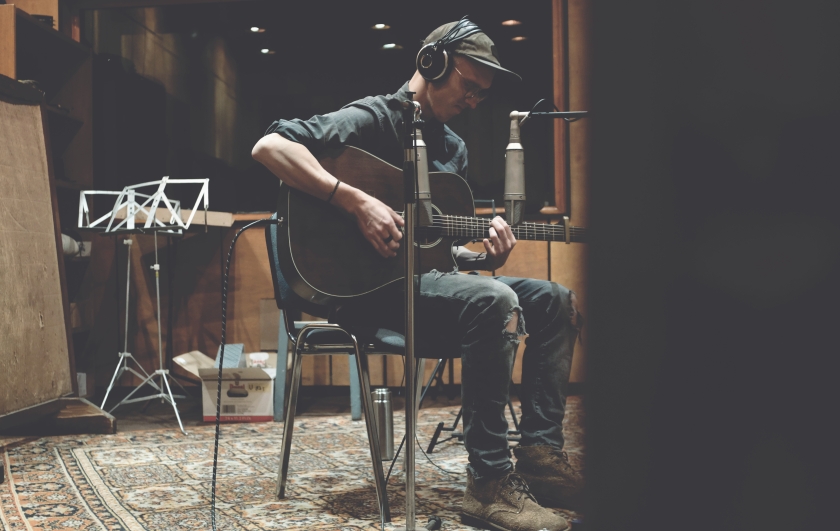 August is just around the corner, and the winds have changed to introduce a new set of smells and feels. The heat takes a step back to give way to a chilled atmosphere, the kind that feels empty at first, but once you listen, you’ll hear. Today it’s time to introduce a great band and their freshly dropped release, and the sound they craft feels exactly like that early autumn touch.

The band I’m going to talk about is Pacific K, a Latvian four-headed indie rock group. The quartet consists of guitarist Richard Libietis, drummer Nauris Babris, bass player Toms Kursitis and the songwriter, vocalist and guitar player Kristaps Bedritis, the mastermind behind the formation of band. Together they craft a sound that immediately strikes as moody, melancholic and atmospheric, and at the same time it feels light, fluttery and optimistic. The guitar playing is masterful, with notes gliding, dancing and twirling around in the stripped yet intricate and beautiful space that feels unmistakably Baltic. It feels like home put into audio for me (I live in the Baltic) and the band manages to create this special kind of music that tells little tales which take place around me instead of somewhere exotic, and yet it feels much more magical than some tropical place.

“I often refer to my songs as being meditative. Whether is a quiet and intimate story of profound love or an overdrive guitar riff that breathes energy, or a groovy, African-inspired rhythm, I always try to bring those depths and inspiration to the listeners. So, what people can expect, and what I often invite them to do, is to let themselves flow with the music, join the journey and see where it takes them.”

I am not surprised they have performed in Positivus among other big festivals of the region, in fact it would be surprising if they hadn’t – their full-bodied sound is an invitation to a really great evening spent with the band.

Today’s release is a solo effort by Kristaps Bedritis, a 4-track EP called “Light Variations”. The EP takes a selection of songs out of the band’s other release “Light Between Oceans” and modifies them into structurally simple yet emotionally rich tales. With excess removed, the singer and his guitar remain to recreate a different visual, another side under the same theme, and the percussive elements giving a sense of flow.

The album begins with the Light Variation of “White Wanderer”, a stripped-back atmosphere featuring sweet guitar melody running along the song like a bittersweet memory from the lovely past times, and the singer’s soft and emotional voice. This song is followed by “Hold Your Gaze”, which immediately features a falling curtain of guitar sound, slightly distorted around the edges and melodically underlining a certain feel of anticipation.

The third Light Variation of the album is Cave, a swaying beat and melody which feels especially moody here. Kristaps’ singing takes on new emotional heights as the song progresses. The last song is “Solace”, an endless soundscape illuminated by gentle guitar notes echoing around the singer standing still in the middle of the landscape painted by the instruments.

“Light Variations” is a special release for the band, especially Bedritis, who was struggling with a lot of things placed upon him by the pandemic. In many ways, this album is a triumph, a clear victory over all the struggles he faced and the artist finding the creative light within himself once again:

“This EP is basically me re-discovering joy in music. It has always been my passion, but I guess I got lost for a little while. Last year was tough, with the pandemic and all, and it kind of took its toll on us as a band as well. After releasing our first LP “Light Between Oceans”, we had some bigger and smaller things to look forward to. And when all our plans came crashing down, I found myself in some low places emotionally. But then, early this year, I found some sort of new energy and inspiration which made me want to start creating again. And then, amongst other creative ideas, I thought of playing around with the songs we released on the album. I had also just picked up a hollow-body electric guitar which was something new for me, because I had just played acoustic before. So, it all opened up new sounds for exploration to me and I was having fun. I felt that joy again of playing and creating music. Eventually, the idea of this EP came to me, so I held on to it and now, here it is. Keeping the essentials, the lyrics and the melody, these songs have been stripped down and then re-imagined into new variations musically.“

This new release offers a wonderful selection of emotions in the slightly chilly yet not cold space. With autumn feels slowly creeping in, the feelings it evokes sound quite exactly like this album. Time to search out the duvet and make a good beverage, and enjoy the changing Light!

Don’t forget to support this project and to follow on  Instagram, Facebook, SoundCloud, YouTube, and Spotify. You can also check out their official website. If you enjoy his music and are able to provide monetary support, you might consider downloading it on Bandcamp; for virtual concerts you can go to songkick “Live from their sofa to yours”.

You can obviously find it in the following Playlists: Less Than 1,000 Followers, Indie Only, Alterindie State Of Mind, Chill – Folk – Acoustic, and 12 New Songs This Week.