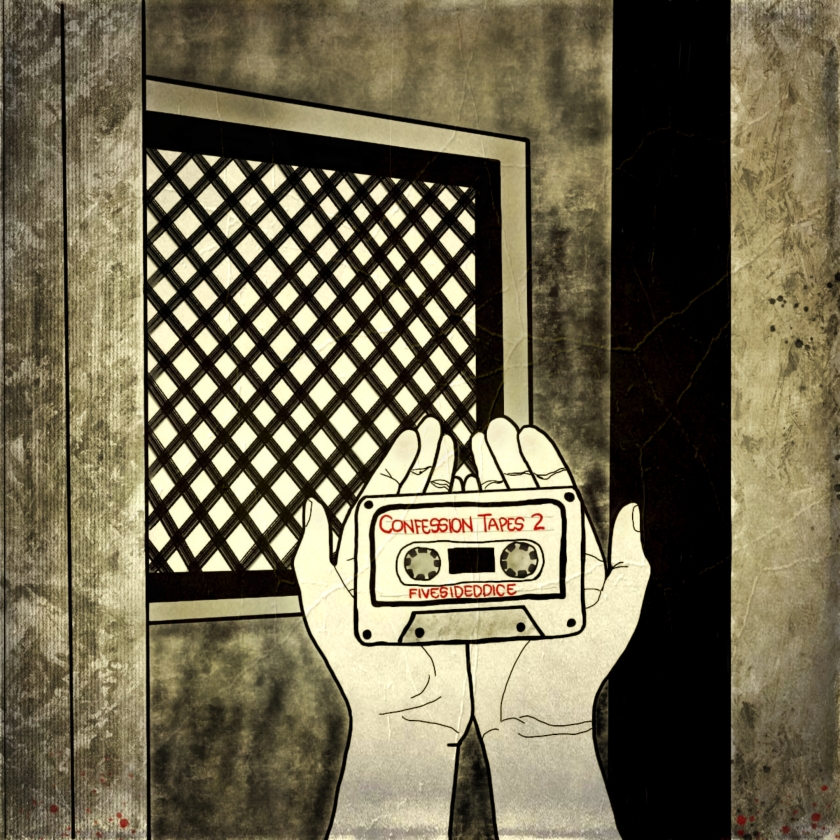 FiveSidedDice is the music project of Roscoe Nefdt (vocals, guitars, drums, synthesizers, various other stringed and percussive instruments), formed through Roscoe’s interest of many different kinds of music from across the world, with the intention of exploring music and sound as a whole. Influenced by everything from bedroom indie folk and divebar punk rock, to hardcore hip hop and jazz, FiveSidedDice has performed as the frontman of various groups such as Undead Generations and Coastal Clones and as a solo act at Earthdance Fest and Despatch Rock Festival, opening for Comeback Kid (Canada) and Straatligkinders (South Africa), as well as receiving airplay on numerous local and national radio and TV stations such as Bay TV and MannMade Radio.

The ethos behind FiveSidedDice’s latest EP, Confession Tapes 2, reflects on the need for honesty and transparency, especially in music and art as catharsis. It is an attempt at brutal honesty at face value, trying to become a vehicle for self-growth and changing by raw expression of the inner self. The EP also touches on mental health with regards to social alienation and isolation, insomnia, inner insecurities, introspection, and eventually gratitude and love. “The songs that are on Confession Tapes 2 were written over the course of the last couple months, as a result of being isolated and by myself a lot during lockdown and whatnot. I think it was a very transformative and introspective time for everyone and a lot of people were struggling, some more so than others. I don’t want to tell the direct and upfront personal stories surrounding each track as I like the idea of people finding their own meaning and connection to music and words. Most of the songs do speak for themselves and are fairly obvious, others are up to interpretation,” Roscoe Nefdt says.

Confession Tapes 2 was recorded at FiveSidedRecords flat studio, Gqeberha, South Africa; and the EP was mastered independently by Roscoe Nefdt.

Describing FiveSidedDice’s future plans, Roscoe says, “As for future releases, I have a new EP with a similar genre-bending vibe to it, titled ‘Baggage’ which is currently in production and should hopefully be out by the end of this year. Another 5 brand new tracks for anyone who likes what they’ve heard from me thus far. I hope to inspire any other musicians and songwriters that are listening to my tunes and following my music journey to perhaps even experiment a bit more themselves and step out of their musical comfort zone.”

Confession Tapes 2 begins with “Rest Your Head,” which focuses on insomnia and its relationship with emotional fatigue and social alienation/isolation. The “me against the world” theme of the lyrics is underscored by chilled-out nylon guitar melodies and hip hop-like beats during the melancholic verses, and later amplified by loud electric guitars and powerful drumming during the anthemic choruses; while a captivating nylon guitar solo midway through the track highlights Roscoe Nefdt’s impressive guitar playing. Next is “The Carved Names,” a jazz/soul song that was inspired by the song of a similar name by hardcore punk band Rudimentary Peni. Characterized by dynamic piano melodies and soulful vocals, the track was written about the impermanence of everything and everyone around us, how nothing stays the same. The track touches on insecurities of feeling, as though everyone around us will betray us or leave us at some point in our life, and uses rain washing down ex-lovers’ carved names on a tree as a depressive and metaphoric way of seeing how all that we have is temperamental, fragile, and mostly impermanent.

“Ride With Me” is about self-growth, introspection, and admitting to one’s own flaws and evils, and was previously released as a promotional single for Confession Tapes 2. The track explores the themes of wanting to change for the better, to improve as a person for the betterment of our own lives as well as all those around us, while reflecting on regret, grief, self-loathing, mental health awareness, and personal development. During the verses, rapped lyrics are accompanied by contemplative acoustic guitar melodies, distant washes of distorted electric guitar, and laidback beats. Thundering bass and electric guitar are then followed by staccato acoustic guitar chords and sung vocals during the ska-like bridges into “Ride With Me”’s powerful choruses; while an impressive electric guitar solo towards the end leads nicely into the final chorus of this inspiring track. The next song, “Hold Me Up,” is characterized by dynamic, clean-toned electric guitar melodies, which complement the track’s introspective lyrics quite well. “Hold Me Up” was written for hopeless romantics and the more neurodivergent adolescents and young adults in the world, especially in small towns, who feel too inadequate for the person they have fallen in love with or wish to befriend. It’s an acknowledgement of one’s own imperfection and flaws, realizing that the person that they’ve fallen for may just be better off without them and their baggage.

The final track, “Thank You,” is a simple way of thanking people who are special in our lives, whether it be a partner, a friend, a family member, or even a small handful of dedicated fans. The song is meant to extend gratitude, appreciation, and love to anyone who happens to hear it and sticks around for the ride that is Confession Tapes 2. Reflective piano melodies and refined percussion accompany the thoughtful lyrics and vocals rather well throughout the track, while a spoken message from Roscoe nicely concludes the track and EP. Confession Tapes 2 is quite an enjoyable listen throughout, showcasing FiveSideddice’s brilliant songwriting and excellent musicianship; I would highly recommended this EP to fans of indie/alternative rock and punk alike.

It  also helps to stream and share his music; you can obviously find it in the following Playlists: Less Than 1,000 Followers, Indie Only, Alterindie State Of Mind, and Only Punk.