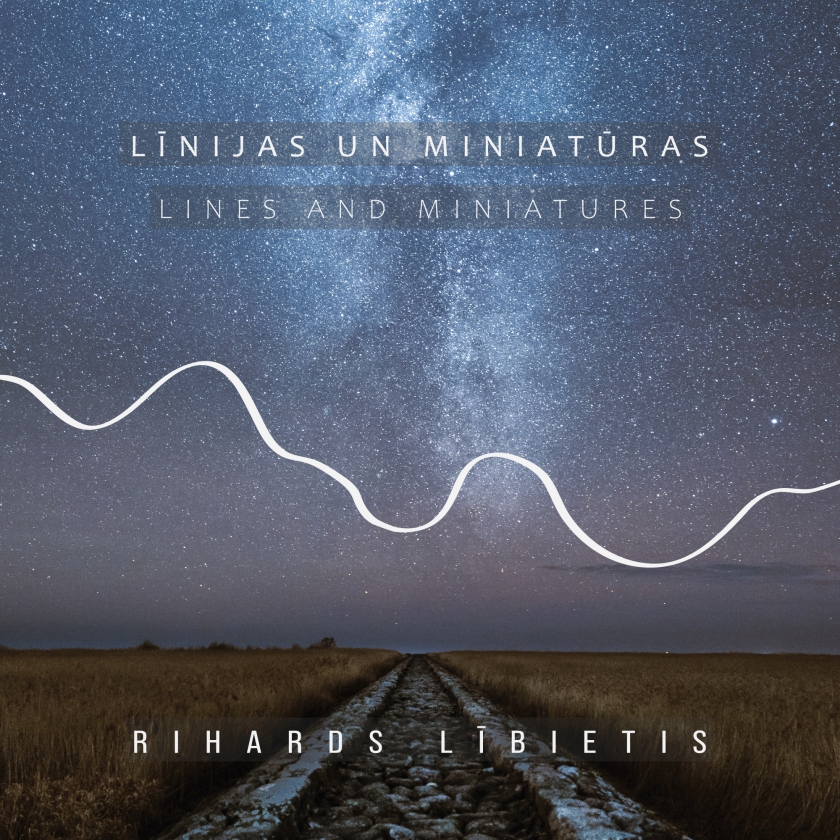 Following the release of the “Transcending Parallels” single last month (for which you can read our review here), Rihards Libietis has now released his Lines and Miniatures album. The musicians involved with the album are well-known in the Latvian music scene; however, this is a new project featuring different collaborations and with an ambitious future perspective. Lines and Miniatures initially started as Rihards’ solo album effort, and gradually increased in scope as the compositions got more complex, demanding a broader range of instrumentation.

Rihards Libietis (acoustic & electric guitars, bass, synths) is joined on the album by Toms Kagainis (drums, percussion), who got involved with creating music for Lines and Miniatures in spring 2021; and it was that time when all the recordings for the album were finished. Both Rihards Libietis and Toms Kagainis are well-known in the Latvian music scene, working with other artists and projects; Rihards plays in the Rihards Libietis Orchestra, having recently released a new album in May entitled Willful Blindness, while Toms is mainly involved in the pop-funk project Citi Zeni. Lines and Miniatures also features talented guest musicians including Erna Daugaviete (cello), Olga Bucinska (violin), Ieva Rutentale (flute), Matiss Repsis (piano), and Beate Zviedre (vocals); and at the moment, Rihards and Toms are creating a band together to perform the material live.

Describing the creative process behind Lines and Miniatures, Rihards says, “At the beginning, the idea behind the project was to create a guitar album – by using various playing techniques, looping etc, but strictly keeping the focus on one instrument – but, as the writing process started, music evolved and it was clear that more sound layers should be added with different instruments. That’s when Toms Kagainis (drums, percussion) joined the team, working together on 7 compositions. While most of the sounds that can be heard on the album are created by various guitars, drums and an occasional synth layers here and there, other great guest artists also appear on the album.”

Lines and Miniatures was initially a slow project to start–Rihards was becoming quite frustrated with the slow progress, and there was somewhat more struggle when writing the compositions–but when the project did start, it somehow went on very spontaneously; for example, the guest appearances on the album came literally at the very last moment. Throughout the album, the band members kept a minimalistic approach while building a comprehensive, inspiring, and dynamic musical saturation. There are a lot of intricate instrumentation layers featured in each track–neatly overdubbed guitars and multi-layered synths being just the top of the iceberg. Some compositions feature well over 100 tracks, and the band members created most of the sounds you can hear on the album naturally, without too much digitalization. Three tracks on the album (“Transcending Parallels”, “Fracture” and “Miniature on Being”) initially started as solo guitar tracks, and can still be performed using a single guitar and loop-station.

Lines and Miniatures was recorded at No Fuss Studio in Tukums, Latvia by Valerijs Cernejs, while the drum tracks were done at AMFO Music studio in Riga, Latvia by Toms Kagainis. Valerijs Cernejs also did the mix, and Rihards Libietis is the composer and producer of the album. Coincidentally, one of the recording sessions took place during the same night when Elon Musk released new satellites in Earth’s Orbit; not knowing this fact, the crew went for a break outside in the dark, and completely freaked out at the seemingly unknown flying objects behaving strangely!

The band members’ influences on Lines and Miniatures include such artists as Thomas Newman, Tony Anderson, and Olafur Arnalds, among other longstanding general influences such as Jack White, Led Zeppelin, This Will Destroy You and countless others that they’ve enjoyed hearing or working with. The album is also directly influenced by the feelings brought on by the pandemic, and reflects on the feelings of loneliness, struggle, and uncertainty, while at the same time conveying a message of hope, encouragement, and strength: that it’s OK to feel hardship, it’s merely a step on a journey to becoming a stronger, better person. There’s also a lot of reflection on the theme of isolation – can we truly be alone in a world where we are indirectly linked by the smallest of actions?

“‘Lines and Miniatures’ is a very personal and subtle album, delving deep in the emotions, experiences and feelings of loneliness, isolation and uncertainty. I think it’s very relevant to the current events of the world – to do the best we can to not get overwhelmed in the background noise and continue somewhat defiantly striving towards the light, the growth of our personalities,” Rihards Libietis says.

Elaborating on the inspiration behind Lines and Miniatures, Rihards writes:

“Emotionally, we really hope that this whole album will take the listener on an inspiring journey. I think the album deals with many themes – loneliness, melancholy, fragility and so on, and there definitely is a pandemic frustration vibe, but there’s also light at the end of the tunnel, will to learn, to transform, to live fully with an open heart. Anyway, that’s the beauty of instrumental music – one can find something for himself in it just by listening carefully.

‘Lines and Miniatures’ is a new venture for me – I usually write/play world music mixed with elements of Blues, African/Middle-Eastern folk in my other project Rihards Libietis Orchestra, or pop/rock with other artists and also as a session player. Since this is a more experimental step in a more ambient/post-rock kind of vibe, I really hope people will find something of value and inspiration there. We tried to keep the emotional message subtle – not trying to convince someone of something, but hopefully it turns out to be a relevant emotional imprint of the atmosphere of this last year.”

Lines and Miniatures immediately draw the listener in with “Fracture,” which starts with a dreamy, contemplative acoustic guitar motif; and soon after the track’s propulsive drum rhythms join in, the acoustic guitar is complemented by a clean-toned, sliding electric guitar melody, the layers of guitars together creating a pleasantly buoyant effect. A dynamic bassline then joins in, nicely underscoring the guitar melodies as they shift and evolve throughout the track, the sliding electric guitar pattern alternating between passages with reverb-laden electric guitar leads. The next track, “Transcending Parallels,” was previously released as a single (for which you can read our review here), and features Toms Kagainis on various DIY percussion, such as kitchenware, knifes, paper, and a water bottle. Beginning with bright, clean-toned guitars, the captivating track later leads into heavier passages with distorted riffs, and eventually gives way to washes of ethereal synth-like electric guitars.

On “Miniature on Being,” layered, reverb- and tremolo-laden guitar melodies drift peacefully, creating a relaxed atmosphere that leads perfectly into “Pattern of Life,” a cinematic-sounding track that nicely combines sweeping cello and violin melodies with electronic-sounding rhythms. “Loose Thread” then begins with the low, tolling sounds of a church bell (created by an electric guitar), while soft, reverbed chords and a tranquil piano melody soon join in along with subtle percussion, creating a mood of reflection and hope that is later amplified by a soaring electric guitar solo and emboldened percussion.

The next track, “Junction,” was recorded when Rihards had an enormously painful wisdom tooth (which had to be extracted soon afterwards); and during the same session, when it came time to record the drums, it turned out that someone had been changing the lights in the studio and the drums were covered with a thick layer of white dust (thankfully, it was possible to clean them up). In spite of these difficulties, “Junction” is a compellingly upbeat track, with shuffling drums and bright, clean-toned guitar melodies that are accented by jazz-like leads and highlighted by sunny acoustic guitar strumming. “Capillaries” then begins with shimmering, clean-toned electric guitar notes; and as low washes of reverb-laden guitars soon join in, their notes slowly echo and bring about a feeling that is melancholic yet with an undercurrent of serenity. Midway through “Capillaries,” a shuffling snare leads up to the powerful drumming and equally potent electric guitar chords heard toward the track’s conclusion, which build nicely on its evocative atmosphere.

On “Border Ridge,” electric- and acoustic guitar motifs work synergistically to highlight the track’s hauntingly beautiful and evolving cello melodies, while airy synths sustain a cinematic quality throughout the track. The next track, “Miniature on Whispers,” conveys a sense of melancholy and fragility, with the delicate arpeggios of a clean-toned electric guitar slowly ringing amidst the atmospheric synths and sustained cello notes, and later underscoring the ethereal vocals that join in towards the end of the track. The album ends with “Heart Line,” on which synth-like electric guitar layers wash peacefully over acoustic guitar patterns, highlighting the graceful flute melodies that fade into and out of the track, and eventually giving way to the sound of a heartbeat in conclusion. Lines and Miniatures is quite an enjoyable listen from beginning to end, once again demonstrating Rihards Libietis’ brilliant songwriting and excellent musicianship; I would highly recommend this album to fans of post-rock and ambient music alike.

It also helps to stream and share his music; you can obviously find it in the following Playlists: Less Than 1,000 Followers, Fresh Singles, Chill – Folk – Acoustic, Alterindie State Of Mind, 12 New Songs This Week, Track Of The Day, Take It Easy, Autumn Acoustic, Hot Stuff Metal, and Sickest & Dopest.